In 2021, two tropical cyclones, Lionrock and Kompasu, hit Hong Kong one after another. As we know, with heavy rainfall always comes a bigger risk of landslides. In 1972, the catastrophic landslide at Po Shan Road in the Mid-Levels shattered a number of buildings, including the 12-storey Kotewall Court, and took away 67 lives. Afterwards, the Geotechnical Engineering Office (GEO) under the Civil Engineering and Development Department (CEDD) implemented a series of landslip prevention and mitigation works in the Po Shan area, among which was the Po Shan Drainage Tunnel. Completed in 2009, the Po Shan Drainage Tunnel reduces the risk of major landslides by controlling the groundwater levels with innovative technology and becomes one of the most iconic landslip prevention and mitigation projects in Hong Kong. Besides, to convey the importance of slope safety to the public, the Landslide Sci-Tech Chamber has been set up by the GEO in the tunnel.

Geotechnical Engineering Graduate of the GEO, Miss Ip Ching-tung, Gloria, tells us that the Po Shan Drainage Tunnel comprises a pair of drainage tunnels (3.5m in diameter and 500m in total length) and 172 sub-vertical drains (with the longest being 100m) installed with the technique of “up-the-hole hammering” inside the narrow tunnels. It is also equipped with an automatic real-time groundwater monitoring system. When the groundwater reaches a relatively high level in times of intense rainfall, the system will alert colleagues with text messages and automatically regulate the switches to keep the groundwater levels within a specified range, thereby improving the stability of the hillside against large-scale landslides to safeguard public safety.

Miss Gloria Ip says that, apart from adopting the “up-the-hole hammering” technique for the first time in Hong Kong, project staff introduced a Retractable Tunnel Boring Machine (TBM) for boring the two drainage tunnels. After boring one of the tunnels, the TBM retracted to its original position to bore the other tunnel. A receiving shaft at the tunnel end to retrieve the boring machine was no longer needed. The adoption of this innovative technique shortened the time required to bore the tunnels to four months and also greatly reduced the environmental impact of the project.

The GEO has set up the Landslide Sci-Tech Chamber in the uniquely designed Po Shan Drainage Tunnel, with guided tours to educate the public on the importance of slope safety. The chamber is divided into galleries of different themes, e.g. the Po Shan Memorial Gallery, which exhibits historical photos and records of the Po Shan Road landslide incident, reminding the public of the tragedy and the lesson learned; the Climate Change Impression Gallery, which illustrates how global warming has led to more extreme rainstorms, and explains the importance of sustained effort to ensure slope safety under extreme weather.

Assistant Geotechnical Engineer of the GEO, Mr Fung Yat-fan, Dominic, adds that STEM education and interactive elements are incorporated into the chamber to make the guided activities more fun. For example, the Landslide Wisdom Gallery makes use of video clips to help participants revisit the history of landslides in Hong Kong of more than a century as well as the development of the Hong Kong Slope Safety System; the Drainage Tunnel Expression Gallery utilises Augmented Reality (AR) to visualise the operation of sub-vertical drains and introduce the innovative technology of the groundwater regulation system.

Two students who have earlier taken part in the guided tour describe their feelings about the visit to the Landslide Sci-Tech Chamber, remarking that it has been quite a new experience, such as seeing first-hand how the system works to monitor the groundwater levels in real time and to lower the levels automatically and manually. They also got a close look at the “robotic dog” and learned how the GEO mitigates the risks of landslides using innovative technology. The Landslide Sci-Tech Chamber is now open to the public, schools and organisations for guided tours; reservations can be made through the GEO’s Hong Kong Slope Safety website. For those of you who are interested, don’t miss this out! 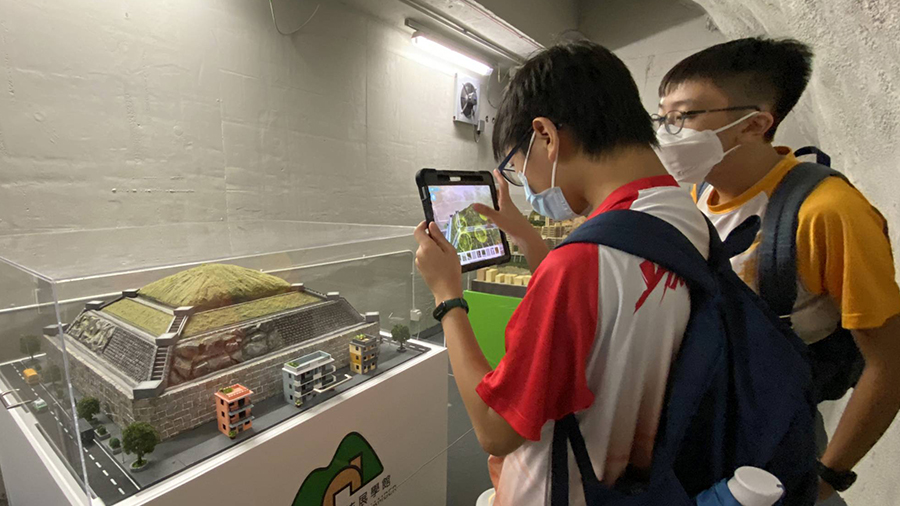 Climate change gives rise to extreme weather, making landslide prevention and mitigation even more challenging. As Head of GEO, Dr Cheung Wai-man, Raymond, says, they hope that the guided tours can educate the younger generation on the history of landslides in Hong Kong, keeping them alert to the risks, and that the public can better understand how colleagues in the GEO eagerly utilise technology to manage the risks of landslides. Certainly, the public should stay away from slopes during a rainstorm or when a landslip warning is in force; and it is the responsibility of owners to carry out timely maintenance of private slopes and retaining walls as prevention.

Next More to watch in LCSD's Edutainment Channel and 101 Academy!
Cultural & Leisure

[Did you know - CEDD series] Why do some rocks laid on shorelines look so weird?