There are more than 4500 kilometres of underground stormwater drains and sewers across Hong Kong. Many of those in the old districts have been in use for over 30 years. The sewers, in particular, are more prone to ageing and deterioration due to prolonged exposure to corrosive gases brought by sewage. Drainage Services Department (DSD) has gradually rehabilitated the high-risk underground pipes by adopting a pipe repair method that requires no excavation of pipe trenches or road surfaces in order to alleviate inconvenience caused to the public during the works.

Gradual rehabilitation of old pipes
Serious wear and tear will cause pipe collapse and road subsidence, bringing adverse impact on traffic, environment and public safety. Since 2017, the DSD has initiated comprehensive planning for the phased investigation and rehabilitation of pipes that have been assessed to be of high risk and formulated a territory-wide replacement and rehabilitation programme. However, we have to face a number of challenges in carrying out drainage improvement works in urban areas. Hong Kong is congested not only with people and vehicles, but also with various underground utilities such as gas pipes, communication facilities and water pipes. The traditional “open trench” rehabilitation technology may inevitably affect traffic and residents. The benefit of the new trenchless technology introduced by the DSD in recent years is that pipes can be replaced and rehabilitated without the need to open up an entire road section.

Only a temporary shaft is needed
According to Engineer of the Project Management Division of the DSD, Mr CHEN Ka-yin, the trenchless pipe rehabilitation works only need to excavate a temporary shaft at an individual location to facilitate the insertion of new pipe material into an old pipe to form a new pipe. Under this method, the excavation requires less open space and a shorter duration of works, allowing traffic to resume quickly after the completion of works to minimise impacts to the public. Currently, subject to the damage of the pipes and on-site situations, the DSD mainly employs three trenchless technologies, namely cured-in-place-pipe (CIPP) lining, spirally-wound lining and slip-lining. 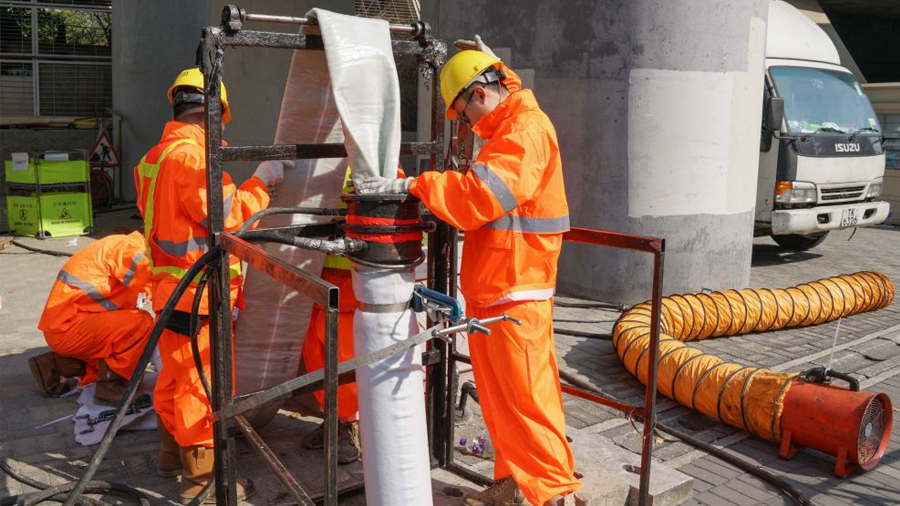 CIPP lining technology
According to Mr CHEN Ka-yin, under the CIPP lining technology (that is commonly referred to as the “insertion into pig intestines” in Chinese), a soft polyester liner with a thickness of 10 to 40 millimetres is pulled into the host pipe through a “launch shaft”. The liner is then expanded and cured by steam or hot water until it hardens and forms a new pipe. This technology can be used on pipes under dry condition. In rehabilitating trunk sewers that still has water flow, we have to employ the spirally-wound lining technology instead. In this technique, a special winding machine is placed inside the pipeline to helically wind steel-reinforced polyethylene strips into circular shape to form a new pipe in the original pipe. Alternatively, the slip-lining method can also be used. As both methods are designed for the rehabilitation of running pipes, no interception is required.

Slip-lining method
Standing at the construction site on Bailey Street in To Kwa Wan, Mr CHEN Ka-yin introduces the use of the slip-lining method at the site. First, a temporary shaft will be set up at an appropriate location. Part of the old pipeline will then be cut and exposed. After cleaning and inspection of the pipe, a 1.5-metre long fibreglass plastic liner will be pushed into the old or damaged pipe section by section. Then, with cement slurry filling the gap between the new and the old pipelines, a new pipe is formed. He points out that although a fibreglass plastic liner looks relatively thin, its structural strength is equal to that of a concrete pipe and its lifespan is up to 40 to 50 years.

Planning for stage 2 works
As the rehabilitation works of all stormwater drains and sewers in Hong Kong involves 18 districts, over the course of four months, colleagues of the DSD visited each of the districts to consult the relevant District Council committees and explain project details to stakeholders, so as to give an early start to the projects. Stage 1 works had begun and are scheduled for completion in 2022. Stage 2 works are scheduled to start in 2020 to conduct condition survey and rehabilitation of stormwater drains and sewers in six districts, including Tsuen Wan, Sham Shui Po and Yau Tsim Mong.

EMSD’s outstanding achievements at International Exhibition of Inventions of Geneva