Pressing ahead with the implementation of the New Territories Cycle Track Network - Youth.gov.hk
Skip to main content
Search

City dwellers have become more aware of healthy living. Cycling, which integrates exercise and recreation, is most suitable for the whole family to participate in. The Government has been committed to developing a comprehensive cycle track network in the New Territories (NT) to provide a cycle track connecting the east and west of the NT for leisure and recreation purposes in order to improve people’s quality of living. Here the colleagues of the Civil Engineering and Development Department (CEDD) will introduce this new cycle track with a total length of about 82 kilometres (km) upon completion and share its design concept and characteristics.

In recent years, the Government has been striving to implement the NT Cycle Track Network project, which will link up the individual cycle track sections currently scattered in the NT to provide a continuous east-west cycle track in the NT by improving the existing cycle tracks and constructing new ones. Senior Engineer of the CEDD, Mr CHU Wai-lun, Thomas, says the comprehensive NT Cycle Track Network broadly comprises two backbone sections: the one from Tuen Mun to Ma On Shan is about 60 km long (starting from Tuen Mun in the west and reaching Ma On Shan in the east via Yuen Long, Sheung Shui, Fanling, Tai Po and Sha Tin), and the other from Tsuen Wan to Tuen Mun is about 22 km long (to be built along the seafront between Tsuen Wan and Tuen Mun). 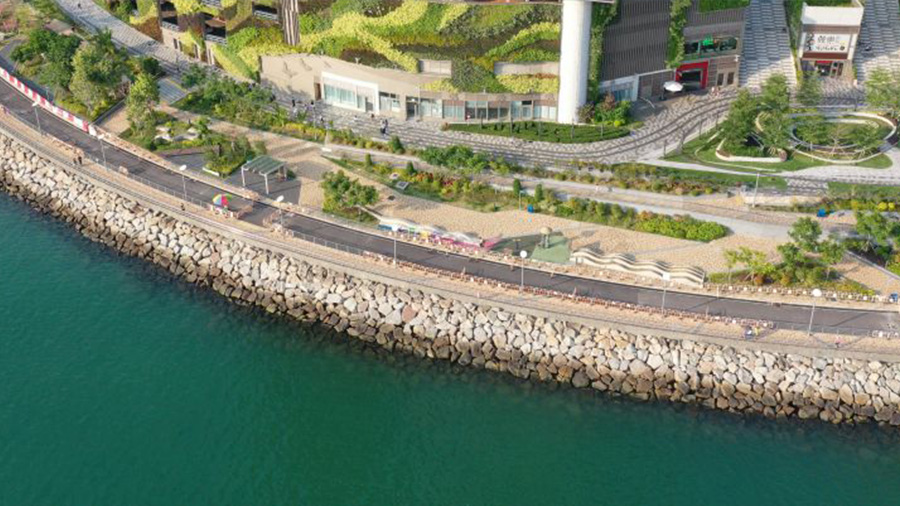 At present, the sections from Tuen Mun to Yuen Long and from Sheung Shui to Ma On Shan have been completed and are open to the public. Regarding the cycle track section that connects the two sections, i.e. the track section that runs from Yuen Long to Sheung Shui, the part along Yau Pok Road in Yuen Long was opened to the public. The remaining parts have been opened and the entire 60 km-long backbone section between Tuen Mun and Ma On Shan is completed. Based on the cycling speed of the general public, it will take about six hours to complete the entire route. And that will satisfy the leisure needs of the enthusiastic riders.

Meanwhile, the CEDD has been taking forward the implementation of the backbone section of the cycle track between Tsuen Wan and Tuen Mun. According to Mr Thomas CHU, the section between Tsing Tsuen Bridge and Bayview Garden in Tsuen Wan is expected to be completed and open to the public early next year.

Engineer of the CEDD, Mr CHIU Chi-ho, Derek, introduces the characteristics of the newly opened cycle track section running along Yau Pok Road to Pok Wai South Road in Yuen Long. He says that in the selection of the alignment of the route, priority was given to spots with beautiful scenery and cultural elements, such as Kam Tin River in Yuen Long and Tai Fu Tai in San Tin, to enhance the appeal of the track. At the same time, the project team had considered the impacts of the cycle track alignment on the residents, environment and ecology in the vicinity, so as to optimise its design to avoid affecting some conservation areas, bird habitats, etc. 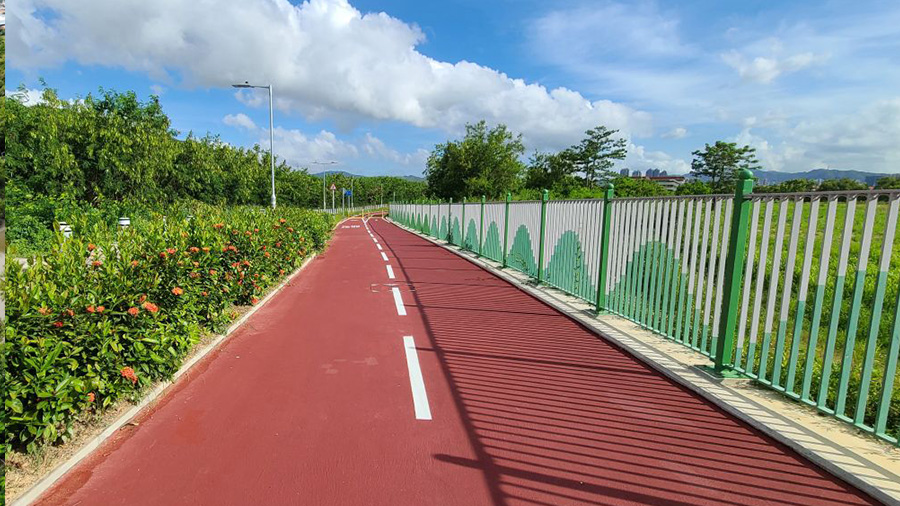 According to Mr Derek CHIU, the Government attaches great importance to safe cycling. In the design of the cycle track, the project team has considered its width, gradient and curvature, and provided proper traffic signs, road markings and guard rails at suitable locations to protect the safety of cyclists and other road users. Furthermore, wherever technically feasible, cycle bridges and cycle subways are provided to minimise the need for cyclists to get off their bicycles to cross the roads.

It is equally important to beautify the environment. The project team has specifically arranged the planting of flowers that blossom all year round alongside the cycle track. Apart from preserving as far as possible the existing trees next to the cycle track, hundreds of new trees and tens of thousands of shrubs have been planted to create a green environment in the community. The railings along the cycle track have been specially painted with patterns of rolling hills to blend in harmoniously with the natural surroundings.

To create a comfortable cycling environment, Mr Derek CHIU says that the department has also provided ancillary facilities for the cyclists, such as resting stations with bicycle parking spaces to allow cyclists to take a rest or visit nearby attractions before continuing their journey. Cycling entry/exit hubs are also provided in the vicinity of MTR stations such as Sheung Shui Station and University Station for cyclists to gather or disband. The hubs provide facilities such as bicycle rental kiosks, bicycle parking spaces, first aid stations, refreshment kiosks and toilets.

Back
Pressing ahead with the implementation of the New Territories Cycle Track Network
Previous The most popular exhibition: "Eternal Life – Exploring Ancient Egypt" (Leisure and Cultural Services Department)
Gov Job

What you need to know when applying for AO

Task force on “waste reduction at source” at reservoirs

“Repair Our Own Trails” (Agriculture, Fisheries and Conservation Department)