Colleagues from the Mines Division of the Geotechnical Engineering Office (GEO) of the Civil Engineering and Development Department (CEDD) will take us to Lam Tei Quarry in Tuen Mun, which is the only existing quarry operating in Hong Kong, to appreciate the quarry operation and the work of the Mines Division in supervising   the use of explosives for “mountain cutting and rock breaking” (rock blasting and breaking) in the quarry.

Lam Tei Quarry was established in the 1960’s and has operated under contract since 1982.  The quarry is located about 3 km north of Tuen Mun New Town, covering an area of about 30 hectares.  According to the Senior Geotechnical Engineer of the Mines Division, Mr HUNG Kin-chung, Roy, the quarry has been operating for about 40 years, presently accounting for 5% of the total supply of rock products used in Hong Kong.  Operation of Lam Tei Quarry is scheduled for completion in 2023, when the site will be released for development use.

Quarry not only to produce rock products

A quarry can produce about 70,000 tonnes of rock products each month. Following drilling and blasting of a rock mass, the blasted rock will be carried by trucks/conveyors from the blast location to rock crushers for crushing, screening and sorting into aggregates or other rock products in different sizes for construction uses, including production of concrete and asphalt.

Aggregates are essential for the production of concrete and asphalt.  Integrating the production lines of concrete and asphalt with quarrying as a one-stop operation in a quarry can achieve a better efficiency in handling/moving of rock aggregates for   processing to the concrete or asphalt. It also saves time, lowers costs and reduces carbon emissions.  Besides, quarries can also help to receive the surplus rock generated from local construction projects and recycling it into useful aggregates and other rock products. 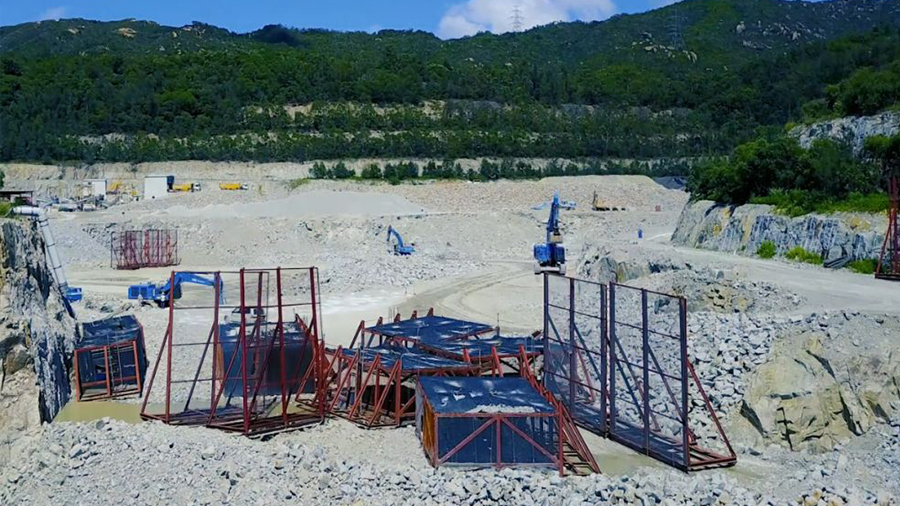 Quarrying in old days was labour intensive. Workers would have to manually break up a large rock blocks, using hammers, chisels and steel wedges, into aggregates in different sizes for use, the process of which is called “stone breaking”.  At that time, limited considerations were given to the safety and health of workers, as well as the environmental impact of the quarry operations.  However, the situation has improved since the 1960s when the Government enacted new regulations to better control the use of explosives and the workplace safety in quarries.

Stone breaking is no longer used in quarrying. Nowadays, “controlled blasting” will be used for rock extraction from a rock mass.  According to the Explosives Officer 1 of Mines Division, Mr TSE Wai-tong, the current blasting techniques have been well developed to make blasting safe and efficient.  Nevertheless, quarry operators are required to apply for and obtain approval from Mines Division for blasting to ensure that the blast design, arrangement and monitoring plan are in line with the safety and environmental standards prior to the proposed blast.

Mr TSE Wai-tong also pointed out that no matter how big a blast is, its impact cannot be ignored and safety issues should never be discarded.   Protective measures such as blasting cages and vertical screens would have to be provided at the blast locations, with a view to protecting against flyrock (projected rock fragments) affecting workers and adjacent facilities.

According to Senior Explosives Officer of the Mines Division, Mr LEUNG Pak-ming, before the cartridge explosives and detonators are placed in predrilled blast holes at the blast location, the Mines Division will deliver the required explosives from the Government Explosives Depots to the site at the contractor’s request. In order to minimise the environmental impacts of vibration, air overpressure and noise due to blasting, delayed firing at each blast hole can be carried out using detonators suitably arranged at different time delays.

According to Mr LEUNG Pak-ming, blasting is required for rock excavation in many infrastructure projects involving site formation works, tunneling, etc. In order to facilitate  blasting by early morning, colleagues may have to start work in the early hours after midnight. Regarding the working environment, they may have to work underground (e.g. in deep excavations or tunnels) where the environment is hot and stuffy. The discomfort, particularly when carrying heavy equipment, is beyond description.

Whether the Anderson Road Quarry, which has just accomplished its historical mission, or Lam Tei Quarry, being the only quarry still operating, many workers have taken part in the activities of “mountain cutting and rock breaking”.