Many people love to visit theme parks to go on the exciting and thrilling amusement rides for the sheer sensation of speed and centrifugal forces. In the carnival held along the Central Harbourfront in 2018, there were different kinds of amusement rides available for the public to “have the fullest fun”. You may wish to know that, five months before the opening of the carnival, the Electrical and Mechanical Services Department (EMSD) had in fact started the vetting process of the amusement rides applications to ensure a fun and safe experience for visitors. This time, we have invited two colleagues from the EMSD to introduce how the department oversees the inspection and maintenance of the rides to ensure public safety.

The 5th Great European Carnival, launched in Hong Kong in December 2018, came to a close in February 2019. There were about 30 amusement rides on-site. Apart from the rides that were on offer before, including the Flying Swing, Compact Spinning Coaster and Mach 5 (of which the vertical arms and seats can spin 360 degrees in the air), five new rides were also introduced into Hong Kong for the first time.

Requiring “Permit to Use and Operate”

As early as two months before the launch, a team of the General Legislation Division of the EMSD had kick-started its regulatory work on the amusement rides. According to Engineer of the EMSD, Mr. CHAN Chi-pui, all amusement rides that are open for public use, including those in theme parks and other sites, must be granted with the “Permit to Use and Operate”. The department will first assess the design of each amusement ride. Passing the design approval is just the first step for the operators. With the design approved, they must then install the amusement rides in accordance to the approved designs, arrange an independent surveyor to conduct a thorough test and employ a qualified competent person to be responsible for the subsequent operation and maintenance of the rides.

Among those important tasks for EMSD, one of them is to oversee the non-destructive tests of amusement rides by monitoring the surveyors on conducting non-destructive tests on critical welds in order to ensure that the rides can bear the stress and loading. Other items to be examined include electricity safety test, full or half loaded operation test, emergency drills, etc. The EMSD will issue the “Permit to Use and Operate” to the operators only when all testing results are satisfactory.

Colleagues need to be “bold and cautious”

The General Legislation Division of the EMSD has a total of six engineers and inspectors in charge of the regulatory duty of amusement rides safety. As Mr CHAN Chi-pui describes it, they need to be “bold and cautious”, and have extensive professional knowledge of electricity, machinery and different operating systems. When supervising the testing of amusement rides, they must make bold assumptions and raise different possible scenarios to surveyors. They have to stand firm in requiring that the designs of the machines are in line with international standards. Stringent tests were conducted to ensure that the amusement rides are safe to public use.

Regarding the difficulties they face, Mr CHAN Chi-pui says that all operators want to commence business as soon as possible after taking over the venue. However, based on his past experience, such venues are often not available to operators until two weeks or so before a carnival opens. Because of the tight schedule, his colleagues need to work overtime to have all the licensing work completed. 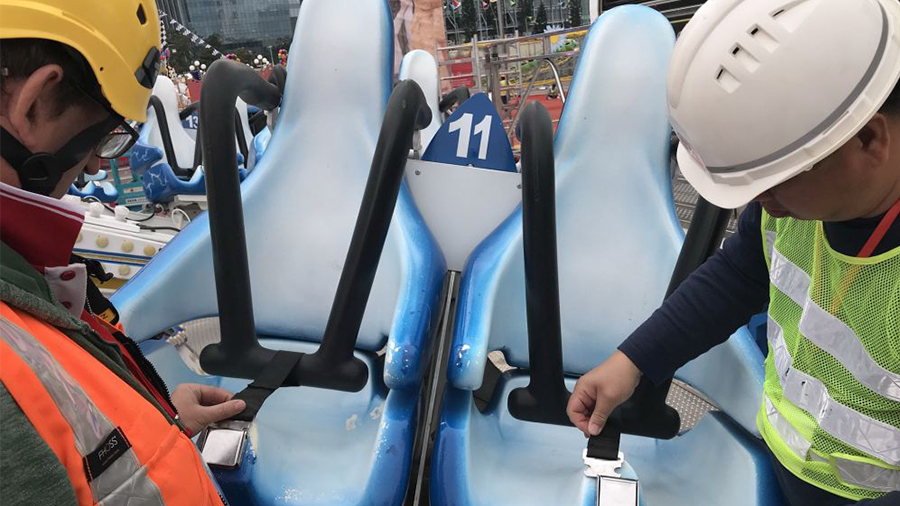 The regulatory work by the EMSD will continue after the amusement rides are in operation. For example, inspection work will be carried out to ensure the operators fully comply with the procedures in carrying out daily maintenance and checking on the rides. Inspector of the EMSD, Mr LEE Yuk-tung, says that the department will also conduct surprise inspections on the amusement rides in the venue. And upon receipt of a complaint, or in the event of occurrence of reportable incidents on the rides, they will immediately go to the venue for investigation for follow-up actions to safeguard the safe operation of all amusement rides.

Each year, there are brand new amusement rides for the EMSD to handle. Mr LEE Yuk-tung says that the department will ask the operators to submit additional design review reports to highlight aspects which we need to pay more attention on. As the operators of the carnival came from different countries, they have different styles of operation and our colleagues have opportunities not only to communicate with different people, but also to come into contact with and get to know various operating methodology of the electrical and mechanical devices. These are all valuable working experiences which cannot be found elsewhere.

The EMSD is the guardian in charge of the safeguarding on electrical and mechanical safety. The dedicated team responsible for amusement rides need to be on standby duty even at weekends and on holidays. Needless to say, operators of amusement rides also have the responsibility to ensure proper maintenance and safe operation of the rides. On top of that, members of the public must also be aware of their own health and abilities, before taking part to ride on the amusement rides. By that, fun and safety can be assured at the same time.