Rock cavern development is one of the Government’s multi-pronged strategies to increase land supply and is of great importance to Hong Kong’s long-term development. The Drainage Services Department (DSD) has commenced relocating the Sha Tin Sewage Treatment Works (STW), which is currently located at the mouth of Shing Mun River, to the cavern site at Nui Po Shan of A Kung Kok at the opposite bank. The relocation will release the existing site for uses beneficial to people’s livelihood and improve the local living environment. It is currently the largest cavern development project in progress in Hong Kong. Staff members from the DSD are here to introduce the details of the works and explain how to enhance works efficiency by adopting new technologies.

Releasing 28 hectares of land after relocation

Occupying 28 hectares of land and handling about 250 000 cubic metres of sewage per day, the existing Sha Tin STW is the largest secondary sewage treatment works in the territory. The relocation can release the existing plant site for other development uses. The new Sha Tin Cavern STW will occupy 14 hectares of land, which is 15 times the size of the Stanley STW housed in caverns, and will be the largest of its kind in Hong Kong. Even with a smaller footprint, the new plant will have the same treatment capacity as the existing one, with the adoption of advanced sewage treatment technologies to meet the demands of the local population and to improve services for residents. 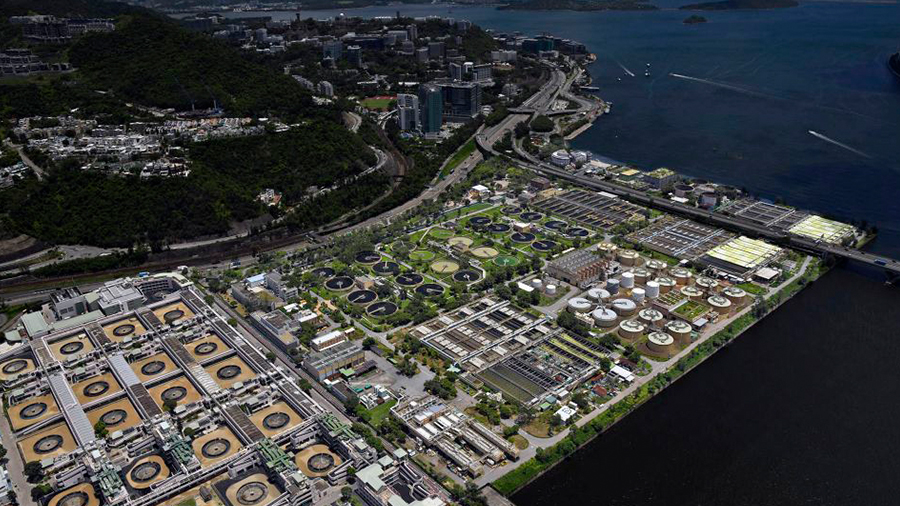 Three stages of the relocation project

Geotechnical Engineer of the DSD, Mr Ko Ming-yuen, Elton, said the relocation project will be taken forward in three stages. Stage 1 works mainly include site formation works at the cavern portal area and main access tunnel construction; Stage 2 works cover the main caverns construction and upstream sewerage works; the remaining works comprise mainly the construction of sewage treatment facilities in the new caverns, and demolition of the existing Sha Tin STW. Stage 1 works commenced in February 2019 and the construction of the main access tunnel by drill and blast method is underway. The works are progressing on schedule and are expected to be completed by 2022 as planned.

Construction of a temporary flyover to minimise traffic burden

Regarding the design, the caverns serve as natural barriers fully enclosing the sewage treatment facilities while maintaining the natural scenery of the hilly landscape. The DSD will also adopt odour control measures to further reduce the impact of the odour on the community to improve its environment. Besides, as explained by Engineer of the DSD, Mr Poon Sze-lim, Kenneth, the construction and demolition (C&D) materials generated from the tunnel blasting works needs to be removed by construction vehicles. To minimise the impact on the nearby traffic, particularly given that A Kung Kok Street is one of the traffic arteries in Ma On Shan, the project team has purposely built a temporary flyover across A Kung Kok Street. Using the flyover, construction vehicles can travel in and out of the construction site without using A Kung Kok Street and the pressure imposed by the works on the nearby traffic can be reduced. 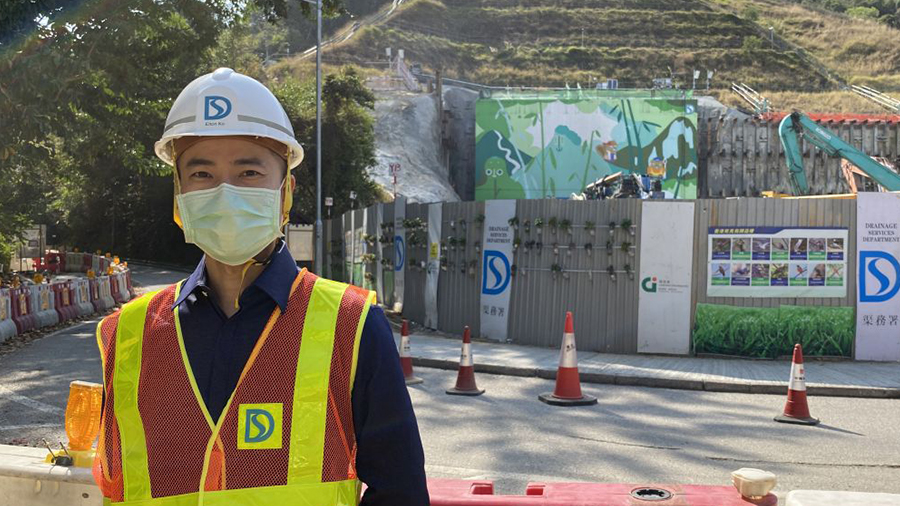 The project team has also adopted various new technologies, such as Building Information Modelling (BIM) and Design for Manufacture and Assembly (DfMA), to enhance the efficiency of the construction of the temporary flyover.

BIM technology can present the works design and site environment in a three-dimensional (3-D) format, enabling the project team to grasp the details accurately and to identify and handle all sorts of potential problems more easily so as to facilitate amendments. Simulated exercises can also be conducted to improve the construction programme and the temporary road closure arrangement. With DfMA, the team is able to build the viaduct piers and foundation of the flyover at the site while components of the flyover are being prefabricated at the factory, thereby significantly shortening the construction time. With both technologies at play, night-time lifting and installation works were completed in two nights instead of six nights as originally planned, reducing the impact on traffic caused by late-night road closures.

Close liaison with the community

Besides, to enable the public to gain a better understanding of the relocation project, the project team has always maintained close liaison with members of the community and took the initiative to share the work progress with them. A community liaison centre is set up by the roadside of Mui Tsz Lam Road near the construction site so that residents can enquire about details of the works project.

The hilly terrain with strong rocks in Hong Kong is highly suitable for developing rock caverns, particularly on the urban fringe. We can use such “hidden” land resources as caverns to support the relocation of suitable public facilities so that surface sites can be released to provide more land for Hong Kong’s sustainable development. The above-mentioned relocation of the STW to caverns can bring multiple benefits. Other than improving the environment of the current STW site and the surrounding area, it will also release land for other uses beneficial to people’s livelihood at the same time.

EMSD’s outstanding achievements at International Exhibition of Inventions of Geneva