Historical records of the Hong Kong’s quarrying industry date back to 1841. In the 1940s, illegal mining was quite rampant in Hong Kong. In response, the Mines Section was established under the Labour Department in 1951 to regulate local mining operations. Subsequently, after a number of restructuring and renaming, the Mines Section was placed under the Civil Engineering and Development Department (the then Civil Engineering Services Department) in 1991 and is now called the Mines Division.

Mr Cheng Wai-shun, Wilson, Geotechnical Engineer of the Geotechnical Engineering Office (GEO), says that quarrying in the early days mainly relied on workers to use hammers, chisels and wedges to break stones off the rock mass, and then crush them one by one with a hammer, a process known as “stone breaking”. Later, the industry has adopted “controlled blasting” for quarrying, a reliable method to blast natural rocks with explosives, which can enhance efficiency. The blasted rocks will then be carried to rock crushers for further crushing, screening and sorting into aggregates for various construction uses, including the production of concrete and asphalt. 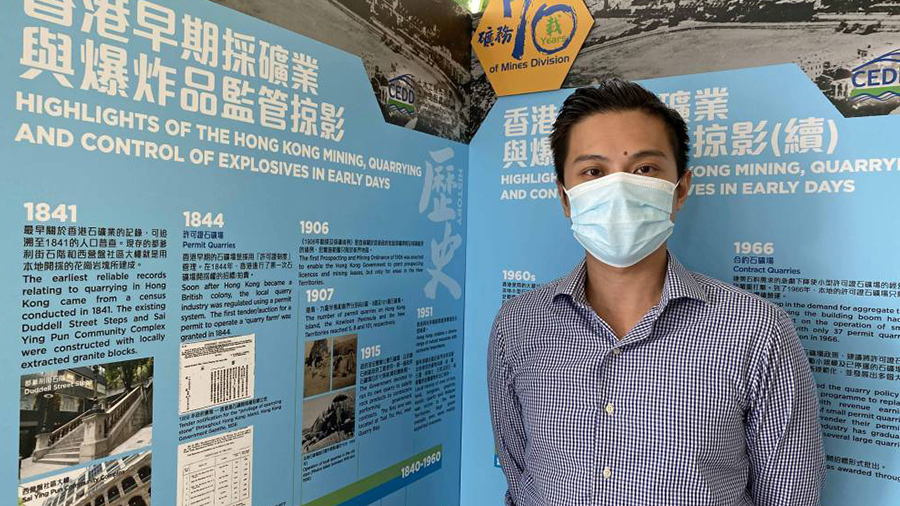 From “mountain cutting and rock breaking” to fireworks displays

In the course of the blasting work of “mountain cutting and rock breaking”, the safety of the public, workers and surrounding facilities must be ensured. In the early 60’s, the then Mines Department (previously known as the Mines Section) started to regulate the use of explosives on land pursuant to the Dangerous Goods Ordinance. Nowadays, apart from managing the operation and safety of quarries, as well as reviewing the strategy of local aggregate supply, the Mines Division is also responsible for the regulatory control of Category 1 Dangerous Goods, and the operation of the Government Explosives Depots in Kau Shat Wan on Lantau Island and Sha Tin Heights. As fireworks also fall under the category of dangerous goods, colleagues from the Mines Division are present at every fireworks display to provide technical support all along to ensure it goes smoothly and safely. 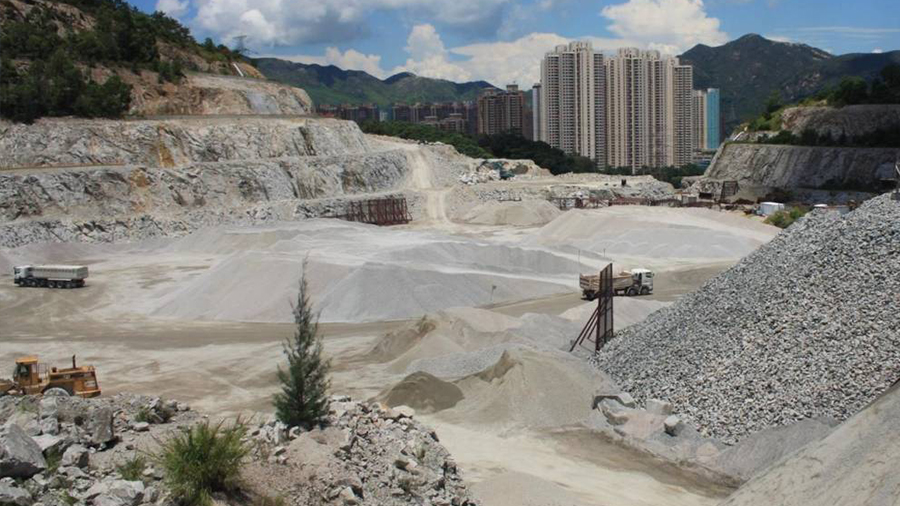 Safety is the top priority in blasting procedures

Blasting is necessary for many works projects in Hong Kong. Take the relocation of the Sha Tin Sewage Treatment Works to caverns in Nui Po Shan of A Kung Kok as an example, blasting has to be carried out in conjunction with other construction methods in both the excavation of caverns and access tunnels.

Senior Explosives Officer of the GEO, Mr Ng Siu-ming, says that site operators are required to apply for and obtain approval from the Mines Division before each blast. The Mines Division is also responsible for the regulatory control of storage, conveyance, installation and detonation of explosives to ensure safety. For example, adequate protective measures such as the setting up of blast doors, blast cages and vertical screens have to be implemented at the site, so that flyrock will not be ejected from the blast locations and fall onto other areas. He shares with us that the control of explosives is of utmost importance to the safety of the public and, for this reason, safety regulations must be strictly adhered to and enforced to ensure that safety is the top priority in every step of a blasting operation. The quarry industry has a long history in Hong Kong. Deputy Head of the GEO, Mr Thomas Hui, says that local quarries mainly serve Hong Kong’s construction industry in two aspects. First, they provide a local supply of aggregates - maintaining an appropriate level of local production to avoid over-reliance on imported aggregates and providing stockpile for contingency. Second, surplus rocks generated from works projects can be recycled in quarries for production of aggregates, turning waste into resources. After the end of quarrying business and completion of the required rehabilitation works, a quarry site will release a large piece of land to meet various socio-economic needs of Hong Kong. Recent examples are Anderson Road Quarry, Jordan Valley Quarry and Shek O Quarry.

At present, the Lam Tei Quarry is the only existing quarry operating in Hong Kong. To sustain the production of local aggregates, the Government is in the process of undertaking feasibility studies on development of new surface quarry sites with a view to dovetailing with the closure of Lam Tei Quarry. In addition, studies are being undertaken to assess the feasibility of developing underground quarrying-cum-cavern development as a new initiative for the quarry industry.

[LCSDPlusss] About the frontline workers in Hong Kong City Hall