In order to mitigate flood risks in Yuen Long town centre, the Drainage Services Department (DSD) constructed a “canal”, Yuen Long Bypass Floodway. Constructed with quite a number of improvement designs and engineering technologies, this man-made channel has beautified the environment and provided a new habitat for numerous plant and animal species while minimising flood risks at the town centre.

Intercepting 40% of the runoff in the Yuen Long Catchment

Yuen Long Plain is a low-lying area with significant flood risks in the past. In 2006, the DSD completed the construction of Yuen Long Bypass Floodway at the south of Yuen Long Town. This 3.8 kilometres long and over 20 metres wide man-made channel can intercept 40 percent of the runoff in the Yuen Long catchment, which is diverted straight to Kam Tin River and then discharged to the sea without passing the nullah at the town centre. To control the water level of the Bypass Floodway and to prevent water downstream from flowing back into the channel, a system of dry weather flow pumping station and inflatable dam was built at the downstream end of the Bypass Floodway and ahead of its intersection with Kam Tin River. At times of heavy rainfall, the dam will automatically deflate and lower to allow flood water upstream to flow into Kam Tin River to reduce flood risks.

Adopting a series of eco-friendly designs

According to Engineer of the DSD, Mr Ng Yat-fei, while proactively enhancing the level of flood protection, the DSD has also strived to introduce the concept of river revitalisation. Various eco-friendly elements have been specifically incorporated into the design of Yuen Long Bypass Floodway to beautify the channel and promote eco-conservation. For example, its flow is directed to pass through different regimes to slow down the speed for providing a natural habitat for plants and animals. Besides, the DSD has also created spaces to artificially encourage plant growth at the bottom and slope of the Bypass Floodway. “Grasscrete” paving adopted downstream is an example. Cavities throughout the concrete surface at the bottom of this man-made channel are filled with soil for plants to grow, enhancing the channel’s aesthetic value with thriving greenery. 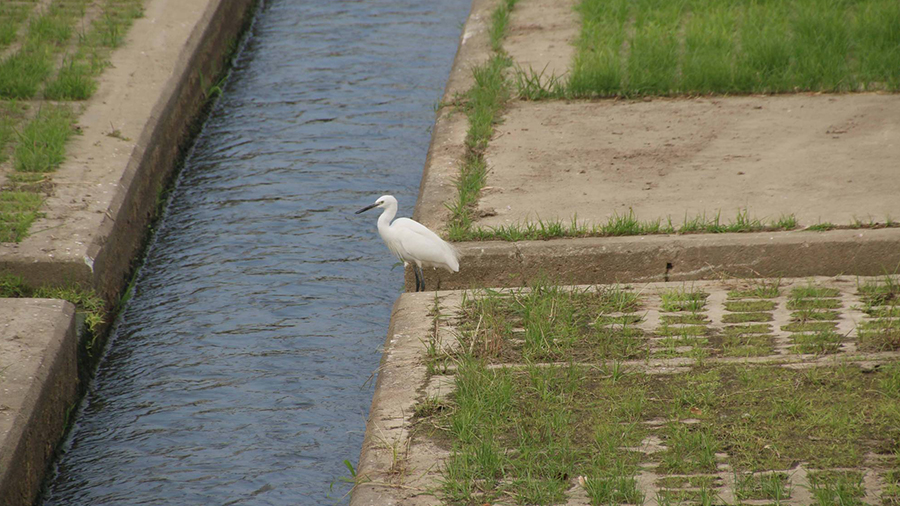 The DSD has also engineered a piece of wetland in the downstream area of Yuen Long Bypass Floodway. With its 7 hectares area, the wetland is as large as 10 full-size football pitches. Various plant species are grown in this wetland, forming a favourable wetland habitat for birds, amphibians (such as frogs), bats, dragonflies, etc., which in turn enhances biodiversity. In addition, the dry weather flow of the Bypass Floodway will first pass through the oyster shell pond, crushed bricks and reed bed in the wetland for natural filtration and purification, reducing nutrients in the water to prevent red tides.

According to results of continuous monitoring, over 130 plant species grow in the wetland and 115 species of birds were once recorded to have settled there. Since its completion, Yuen Long Bypass Floodway has not only been an upgrade of drainage capacity but also a great improvement to the overall habitat of the area.

Conservation of river channels forms part of the work of the DSD, which has been disseminating relevant information through different means. One of the examples, says Mr Ng Yat-fei, is the guided tours of Yuen Long Bypass Floodway and the engineered wetland, which have been rather popular. Schools or organisations may enrol on the tours through the DSD’s website. With guidance and explanation from the docents, participants are able to get on-site knowledge about flood prevention works and biodiversity conservation. The DSD has set up the Nam Sang Wai River Education Trail that begins at Castle Peak Road in Yuen Long and winds around Nam Sang Wai. It takes about 2 hours to complete the entire trail of 5.5 kilometres long. Along the trail, there are information panels explaining the river training works and ecological aspects. You can also check out the “DSD Facilities Online Tour” on the DSD’s website to explore the DSD’s work on flood prevention and environmental protection through the 360-degree panoramic photos and albums of high-definition photos.